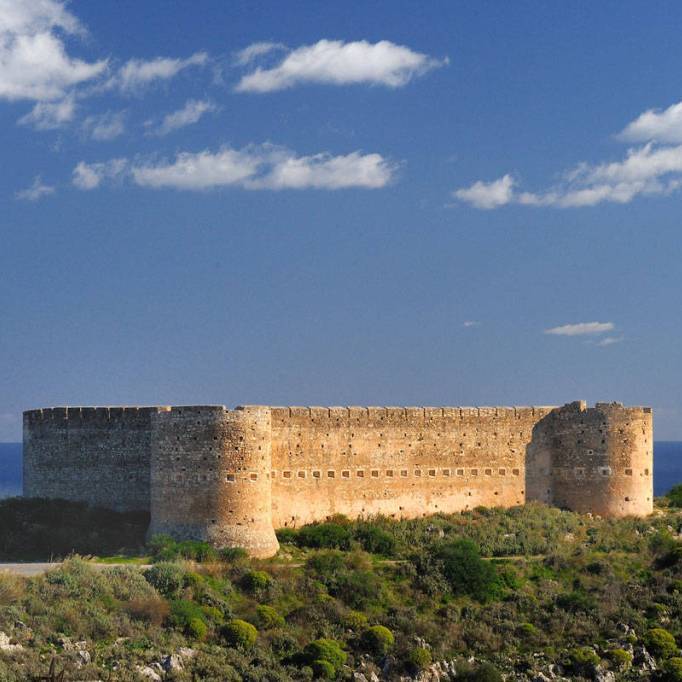 When Sir Arthur Evans decidedly dug up ancient Knossos –  founded around the Neolithic period and abandoned around 1100 BC – in the prefecture of Heraklion, not only did he find a treasure bigger than he had ever imagined regarding the Palace and King Minos and Minoan history and civilisation, but he dug up ceramic tablets written in Linear B – one of the two primal written languages of the island dating back as far as 1450 BC –  that referred to other cities on the island and gave a broader understanding of how the island was governed. One of these cities, and it seems a rich powerhouse of its time due to its position in the natural bay of modern day Souda, was the Ancient city of Aptera. With a 4km wall surrounding its dominion it can be easily understood this was not a weak one either.

I have a soft spot for Aptera. When I need a close-to-home feeling of bygone times it’s easy for me to take a ride to this citadel in Chania that gives the most majestic views of the White Mountains to the south and the bay of Souda to the north. In fact I have difficulty deciding which is my favourite spot as everything seems to demand my attention. Maybe that’s why I go there often because there is so much to choose from.

The tablets in Linear B from Knossos dating back to the 14th-13th century BC refer to the name of Aptera. This it seems is the first official proof of the name. There are several reports as to why it is named this way and the most easily to accept being the name of the first king to govern it, but I love the more mythical one that seems to intrigue everyone who hears it. It seems the Goddess of Nature Artemis ruled over the city and had to deal with the Sirens and the Muses who kept fighting and wanted to know who could outdo each other with their poetry and singing. Goddess Artemis being a fair deity made them compete and those who lost had to abandon the citadel so the people could rest in peace from their constant arguing. From the fair competition the Sirens lost and they had to abandon their wings upon leaving. In Greek the word Ptera = πτερά means wings. By putting the negative prefix ‘A’ in front of the word Ptera the Sirens became wingless. Thus the name ‘Aptera’. Those without wings. The Sirens then became white = Lefkes = Λευκές and dropped in the sea to transform into the small white (Lefkes) islets adorning the bay of Souda! I told you it this version is more fun!

The city itself seems to have lived lavishly as it had commercial and political connections to many coastal Kingdoms in the Mediterranean and many cities in Greece too with ambassadors at each kingdom! The list is long: Egypt, Lybia, Pergamon, Bithynia, The Peloponease, islands of the Aegean, Mainland Greece, the Hellespond on the coast of Turkey, The Adriatic and Asia Minor. Not bad for a kingdom on an island in the Med! Their trade was rich and constant.

It seems the Apterian men were keen archers, mercenaries and pirates!! They would loot and bring back their found treasures to the city, most of it being silver. This gave the kingdom the opportunity to build

its own economy and mint its own coins of which many have been found and primarily depict the Goddess Artemis on one side and the founder King Aptera on the other.

The full lifetime of the city seems to begin at least from what the Linear B tablets say, the 14th BC century and declines absolutely from a catastrophic earthquake in the 7th AD century. Its amalgamation of eras and new conquerors changed its initial use several times over and when you visit the site you can see the architectural influences from every era. With buildings designed on Hellenistic standards, to enormous Roman cisterns and a theatre, to a Byzantine Monastery and a 5th AD  century two part temple of St John and all the buildings and tombs within the walls your visit can only be an interesting one. And did I give enough emphasis about those views? They certainly demand your attention!

Outside of the walls of Aptera is the Turkish fortress of Paleocastro = Old castle, or how we locals know it as Koule fortress. Koule meaning fortress in Turkish. And just as you admire this fortress your eye will fall on to the building  built by the Turks about 120 meters on lower ground, the Fortress of Itzedin. A place that deserves its own article regarding Crete’s history. It was initially built during the Turkish occupation in 1872 as a hospital, army barracks and general facilities, but over time it took its own turn staring in darker times during the civil war in Greece.

If you visit Aptera in spring what you will find is flowers, everywhere! Adorning the buildings nature almost seems to want to participate in the beauty that is Ancient Aptera. And the mountains still dusted with snow might just help with the beauty that surrounds you while immersed deep in history over 200m above sea level….