Apaki, a delicacy for food lovers! 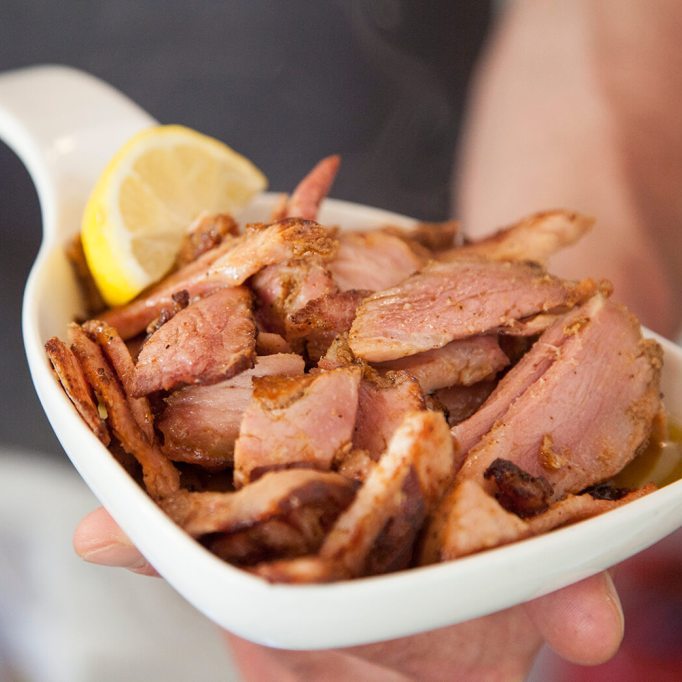 We have a delicacy here in Crete that used to be so highly prized as it only came around once a year and that was made with so much patience regarding breeding the animal till the time was right.

The majority of Cretans for many many years were de facto vegetarian at least 6 days a week and usually much longer.  Eating an animal of any kind was seen as an act of celebration as it was expensive to feed one more mouth albeit an animal.

Cretans have always been farmers and owned or rented for a modest amount a small plot of land which the whole family would contribute in planting and cultivating their food. It was the only way to survive and to nutrition themselves. What was always in abundance is the blessed olive tree that gives its liquid gold so generously for centuries now. Olive oil has kept my people alive through the toughest and most hungered times.

Very few people could afford an animal to breed for themselves and keep, especially in times of Venetian or Ottoman occupation to keep an animal was quite rare as it was given to the oppressors as a form of tax or the animal had to be sold and money was given again as tax. So these families would make the most of what they could with the one large animal they could afford to raise. And usually share with their friends and neighbors.

The animal that could be afforded to be raised was a piglet. First seen as a pet to the many children of the family, no childbirth control in older times so children came in large numbers in families, the piglet was the most affordable to breed in the sense of a large animal. Every family had a chicken or two or a rabbit or two all of which were consumed again on very special occasions.

When the piglet had grown proper into to a big fat pig and time was ripe for it to be sacrificed it was a full day of labor so not one ounce of the animal was wasted. Usually the entire family had to get involved to help with the production of pieces that would become preserved to help from spoiling as no fridges existed before 1960 in Crete let alone electricity of any kind up in the villages.

So the part of the animal that many, mostly the men, would look forward to preparing was apaki.

Apaki comes from the fillet of the pig and less so from the thigh. The fillets are the muscles that sit nestled besides the spine of the animal and it isn’t tough like the rest of the animal. So this soft piece of meat would be carefully removed from the pig and be placed into wine and vinegar, be soaked and smoked.

Many villages have their own twist on the recipe, naturally, but the majority of recipes have the same rule. The fillets get soaked in wine and vinegar for one of two days in which some would choose to add spices in the brine to add a depth of flavour. The spices were usually pepper, salt, olive oil, and a touch of cumin for those who could afford it. After two days of soaking and stirring the brine the best part would come into play; the smoking of the apaki. Everyone had a hearth in their home for cooking and all had hooks close to the opening of the chimney where they could hang pots for cooking. These hooks would be the tool to hang the pieces of meat, which was fully cooked after being in an acidic environment for 48 hours, but as the a meat would never get consumed immediately smoking aided the dehydration needed for the meat to be stored long term.

Again every home seemed to have their own recipe of herbs they would use to help add more flavor to the final product. Usually there were two stages to the smoking. The wood itself that would burn till coal was produced and the herbs needed to add that last touch of smoked goodness that is so characteristic of apaki.

The wood depending where the family lived would be olive, cypress, lemon, orange and apricot. This was the first base flavor to help with the smoking then the herbs would come in to play the last crucial role of making apaki what it is we all know today. The herbs are usually sage, thyme, lemongrass, basil, laurel and savory. As the embers of the

coal are kept slowly burning the herbs would be continually added to slowly burn for a good 8hrs till the meat would take its characteristic smoky color and dehydrate. Some of it would be consumed with raki immediately, usually with the accompaniment of music and dance, and the rest would be stored in the cool room of the family or for those who could not afford it in large ceramic pots as they can keep a steady temperature year round covered with a loomed wool blanket to aid the climatic process.

These days apaki is made in small but passionate small scale food companies that try to honor and keep local tradition alive. You can easily find this delicacy in a supermarket. I recommend you try it. It can be consumed on its own with your favored drink or you can add it to your meals and create unique dishes. Enjoy!

Full credit goes to the rightful owners of the photos provided in the post.

Did someone say Pilafi?!
Minoan female fashion with a passion!