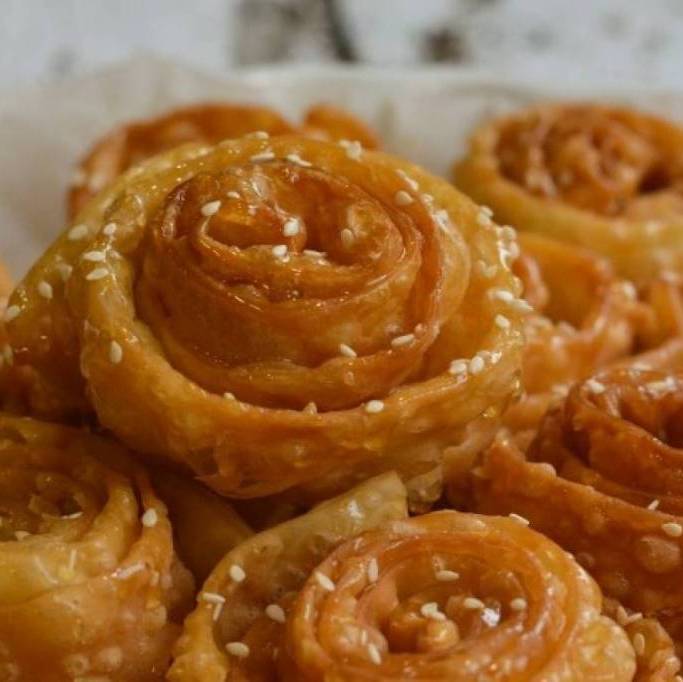 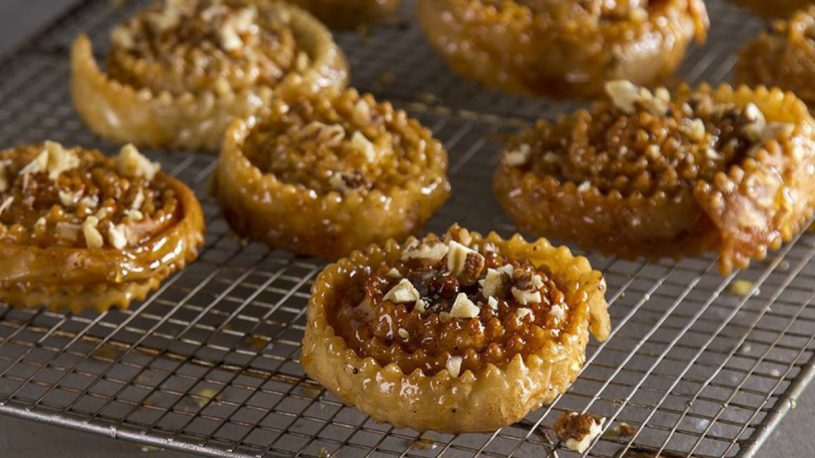 If there is one dessert in Crete that is widely recognized and highly appreciated it must be the well known and loved Kserotigano = Ξεροτήγανο. It literally means ‘dry fry’!! It is named that way as the dough is turned into a very thin filo sheet that is cut in ribbons and is simply fried till crispy and dry. Afterward it is dipped in honey or syrup then powdered with cinnamon and drizzled with walnuts and sesame. It is such a simple, delicious desert. But it isn’t just that, you see. It is a poor man’s labor of love that makes it what it is.

As Crete, for too many centuries to count, was occupied by so many conquerors and having to pay heavy taxes for being conquered it was left with very little opportunity as an island to build wealth for its own people. Thus Cretans over the centuries had to make do with the very few ingredients they could afford to purchase or grow, considering the majority of the island’s population were poor farmers barely making a living with a very small amount of produce they could either sell or store to keep them from starvation.

But Cretans just like any other nation did continue to observe celebratory days and do their best to make a special occasion appear worthy of their efforts with the little they could provide. Flour from some grain was usually available, and the island was sufficient enough for the majority of the population to have wheat. For the poorest of the poor barley, rye and carob flour were their only options.  Most homes had raki and salt -depending on their location on the island, and most certainly all homes had olive oil to help them fry and cook with. Now if they had the luxury of honey or even more so the extra luxury of sugar then the home could almost be considered rich! But the one ingredient that could break the bank of the household was the Asian spice we can all afford these days and we all love: cinnamon.

Families back in the days of poverty needed, out of necessity, to make what they could with the very few ingredients they had that were as pleasing to the palate as it was to the eye. So it seems one lady one day thought of a way of making these round rose shaped tasty morsels in order to create a bit of celebratory status to her Christmas dinner. Kserotigano begun its life cycle as a Christmas dessert that made a name for itself and spread far and wide throughout the island and with such success it is recognized as our local dessert. The ingredients to make the dough are so simple: flour, a splash of raki, water, olive oil, a pinch of salt and a touch of sugar that is optional. The dough is worked on until it becomes pliable and is left to rest in order for the starch to naturally relax and stretch. 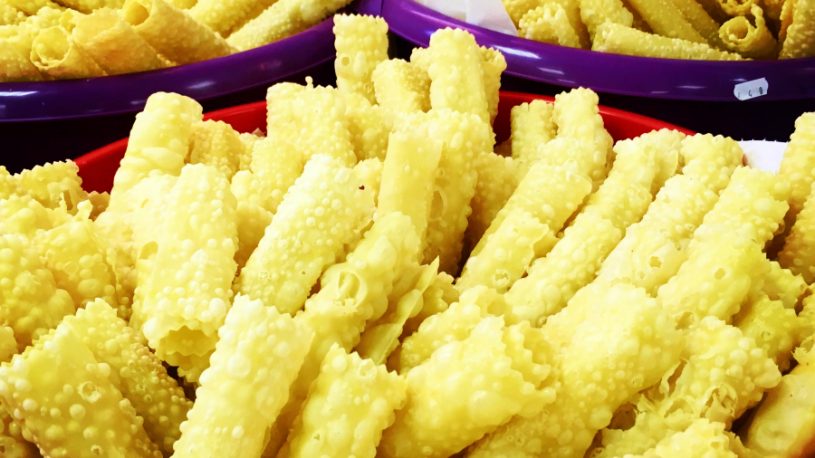 Hardcore home cooks who respect tradition roll up their sleeves and get the rolling pin out instead of a pasta maker and work on the dough till it becomes an enormous thin sheet that will be cut to long, equal in length ribbons. From this point on everything needs to be done quickly. It takes a seasoned mother or grandmother to put on a show of her skills as the dough being so thin will dry and break. So it is most certainly a labor of helping hands. Usually if there was a daughter in the house she was called upon to help or else a friendly neighbor would have to step in and take the matter of the frying stage in her hands.  And this is where is becomes tricky. That rosette shape of the Kserotigano, we are so accustomed to love and look forward to eating, is a matter of talent over a hot frying pan and the swift movements of a hawk. The one end of the ribbon of dough is rolled on to a fork and the fork continues to be rolled over the boiling olive oil till the length of the ribbon is used up and pinched on the body of the rosette! I have no idea how these ladies defy the heat of the frying pan and the risk of burning themselves but their concentration and speed is enviable!

After the rosette is golden in color and crispy, it is left to rest and cool down before it is drizzled with either honey or a combination of honey with sugar syrup and sprinkled with crushed walnuts, sesame and cinnamon. Some cooks omit the cinnamon and sprinkle sugar over them. It tastes fantastic either way.

Kserotigano is so popular and well loved they are now a staple at weddings and christenings and I can tell you I look forward to seeing them and most certainly eating them! In fact I go one step further and put on a puppy look on my face and ask others “are you going to eat your kseotigano?’ so I can have theirs too. I usually look for the thin ladies that are most likely on a diet or I beg they are so I can have their portion!!  The crispy crackling sweet taste of this good looking and great tasting dessert is certainly worth the trickery! Enjoy!Full credit goes to the rightful owners of the photos

The myth of the mighty Minotaur
The famous Cretan Knife