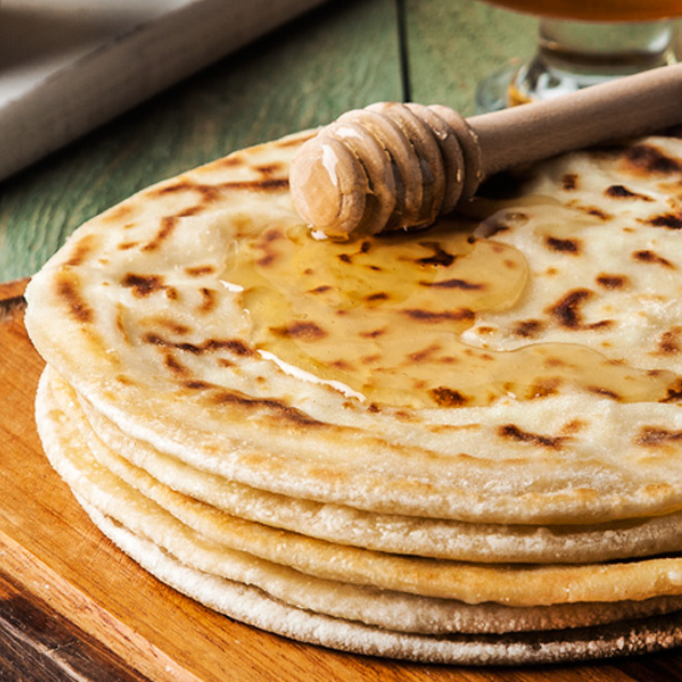 I don’t remember the first time I ate sfakianopita. Was I raised with it? I can’t remember… It’s always been in so many of our lives. But I know what it does to people when they try it the first time. And it happens every time too… their eyes go really wide, then a bit teary, then the “oh man” mumble begins and I delight in the reaction every single time. This round, flat, soft, humble as can be cheese pie seems to do something to people more than any other food I know. Is it the honey that goes with it? Maybe the fact that it is warm? Or maybe the combination of softness and crispiness of the dough? Maybe all of the above? I’m not sure. But what I am sure of is this: it can make an angry person calm down, a sad person happy, a sick person less so and a happy person happier. I’m not exaggerating. I’ve seen it happen before my eyes so many times now, this subtle but most certain change in disposition. This humble little flat pie about the size of a fruit plate seems to have some sort of magic to it. I believe in magic when it comes to food. If you don’t, then think of chicken soup and try to contradict me, I dare you…

I call it humble because it literally is only 4 ingredients: flour, olive oil and water for the dough and soft white cheese called mizithra made from goat’s milk. This cheese has a very slight tangy taste to it thus making it a perfect marriage with the sweet thyme honey that is drizzled over the warm pie. I dare not make it myself because I tend to eat all of the pies I make. I always intend to put them in the freezer for another time but that time seems to come all at once and I’m so full but so happy and so telling myself off for not keeping myself under control; that’s the kind of power this little humble pie has. Even when I go to a tavern and decide to eat one as dessert- because the glutton in me knows kerasma is coming but one pie won’t hurt me, or so I think,  and I find myself having to talk myself out of having another one although I’m full to bursting!! I think someone has to write a book about this little pie just for the things it does to people. I’ve seen people run off with their plate so nobody else can take a bite out of it and eat it in peace while hiding… or I’ve seen arguments as to who had more than they should as some glutton in the company of friends have eaten another’s portion simply because this pie has that kind of power over people. I personally ask my company of friends to not talk to me while I eat it because I want all my senses to completely immerse into the experience. I’ve seen children cry and actually fight over it because one of the siblings have taken a bite off of the other’s and the loud wailing of tears with hair pulling and kicks take over because of this humble little pie!… I wish I could say I’m exaggerating, but I’m not.

I keep calling it humble not only because it has so few ingredients but because it was created by the men in the village of Sfakia, hence its name sfakianopita=sfakia+pie. These men in their majority were shepherds who would go high up in the mountains during spring and summer and could only take with them ingredients that could withstand all their time there. So flour and olive oil being some of the most versatile ingredients helped create the pie we all love. The shepherds would make cheese while up in the mountain and bring it down near autumn to sell and to keep in their larder. But before the it becomes the hard round cheese we know it first is a white soft tangy cheese as I mentioned before. And that first stage curdled white tastiness is as good to consume as the more mature version known as hard cheese. So the shepherds would take advantage of it and either eat it with a bit of bread and olive oil, make dakos out of it which we will talk about another day and then more elaborately make a pie with it. It became so well loved even Micheal Deffner the German linguist exalted that no king could eat no better food back in 1919!!  It is such a great idea as far as culinary professionals will tell you in their own long explanatory vocabulary and even more so to make.  But it so popular we now have food bloggers from all over the world ticking it off their bucket list. I’m so amazed by that alone as people fly from all corners of the world just to taste this humble little pie… and I’m now beginning to think after having put all this in writing that it just might not be so humble after all…so please excuse me while I go make myself one because I’ve worked my appetite up by writing about it. Kali orexi…Καλή όρεξη