It’s on the house – Kerasma 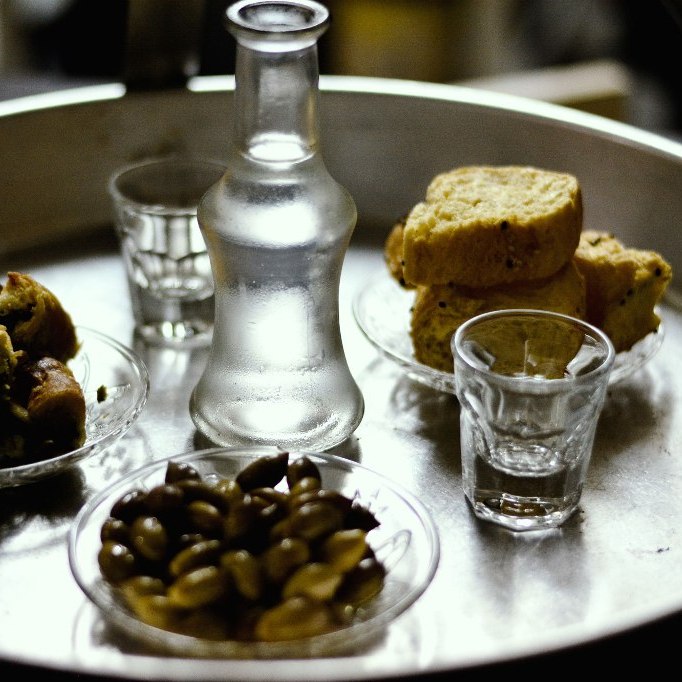 Kerasma κέρασμα in Greek means “on the house” or “this treat is on me”. Eating in Crete is a vocation. When you know where to go and find the hidden gems across the island where divine food is cooked by passionate people who believe in their produce, most likely from their own gardens and oil from their groves, wine from their vineyards, meat from their own flock, you know you have hit the jackpot. I pass on my findings of these precious places only to those who I know will appreciate the whole effort and love placed in the food that yields more Oh’s and Ah’s than talking. This is no exaggeration. But look hard one must in order to find these places. But I’m not going to talk about the food here. I’m going to tell you about the bill and how it never EVER arrives without kerasma. 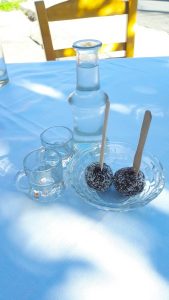 You see Cretans have a deep rooted passionate need to say thank you to their guests with raki or else known as tsikoudia, and dessert. Over the years I have seen many tourists first look worried at the mistake that might have happened in translation thinking that they were paying for something they never asked for and upon explanation the look becomes a wide eyed appreciation and faces full of smiles that never ceases to entertain me and secretly feel proud of my people for their kind gesture.

Kerasma means so much to the  tavern owner and many over the years have adopted their own signature dessert that might accompany the raki that is usually chilled in summer to help cool you down in the summer’s heat. I secretly cannot wait to see what the kerasma might be at every new location I discover and I try to keep an inch of space in my full belly so I can appreciate those sweet morsels of goodness we are so accustomed to receive with the bill. When the tavern or little nook that cooks is small they usually go by the seasons and bring a small plate of chilled watermelon and summer fruits or syrup candied bergamot with yoghurt that tastes absolutely divine!

The one time I was really taken by surprise was a few years back in summer at my absolutely favourite bbq tavern and the kerasma was honeycomb! All the honey goodness was oozing slowly in my mouth; surprisingly cool as it had been stored in the refrigerator 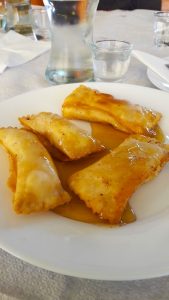 because it was so hot. Even now writing about it I reminisce as if I was given the most expensive thing to eat! I took my time chewing through this divine yet so humble dessert. There is another lady cook who has decided to own like a pro, but with her own rules, the galaktoboureko. Every time I go the vanilla milkyness of the crème between the syrupped layers of fillo just make me sound inaudible as I’m in nirvana. Or when those cheese filled filo parcels called kalitsounia come fried and drizzled with honey… and so many more I could tire you or entice you to visit sooner than you planned… And. It. Is On. The. House!

I have travelled a lot in my time but nowhere have I found this act to be so prevalent than Crete. If you ask for the bill, and for some crazy reason you say “without the kerasma please” (diet maybe? More poun 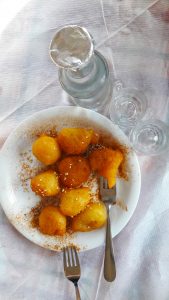 ds on you than you’d like?) the look on the proprietor  or waiter’s face is bewilderment. They feel perplexed and maybe a little hurt that you are passing their only means of showing their appreciation for your preference to eat at their establishment. They will even ask two or three times if we are sure we want to pass. I’ve just succumb to my destiny and don’t reject it anymore because the delicious feast I had prior to this little gesture is the main culprit for any weight issues I might have at times.

But it’s hard to resist a Sunday feast somewhere on the island. It beckons me and my company from afar. The whole gathering, feasting and bonding with people I love and appreciate seem to stop time and I feel somewhat immortal just for a little while. And the cherry on the cake to all this goodness is a humble dessert and raki on the house.

The Concubine’s well
The Venetian watermill of Stilos