Minoan female fashion with a passion! 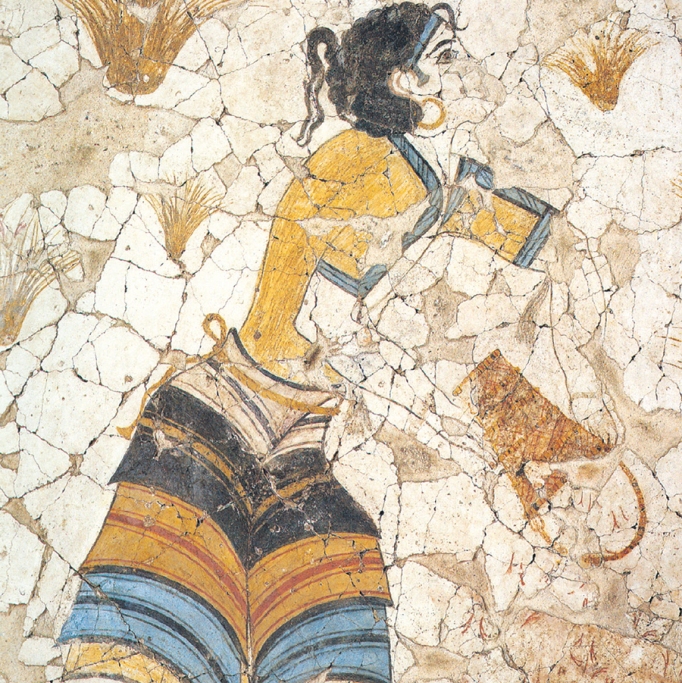 Over the decades we have seen so many international designers dare take steps in fashion that would provoke, shock, and even disgust some purists.

But I want to talk about fashion that dates back to 2600BC-1260BC. We are stepping back in a time where one might think is old and outdated but I would like for you all to think differently for a moment. Crete held, and still does to this day, a prominent place in the Mediterranean. One might look at it on the globe and think very little of it size wise, but its location has made it the belly of trade between three continents during its time. Crete is the link that ties Africa, Europe and the East together like powerful glue and it is the same today when we look at geopolitics. Crete is the helping hand or the olive branch that makes hard political situations less so and trade much easier for these continents to be in constant economic flow with each other. And that can only mean one thing: an amalgamation of influences that created fashion like no other and is quintessentially recognized as Minoan Cretan with no direct parallels with other civilizations.

When I first entered the palace of Knossos in the prefecture of Heraklion as a child and saw the frescoes on the walls with all the ladies dressed in wear that was so colorful, elaborate, rich, geometric, layered and bold I was mesmerised! Even more so when I saw that the ladies had their bare breasts in full view!! The same applied when I visited the Archaeological Museum of Heraklion. It was shocking for me as a child, but now that I am older and wiser I have fully understood Cretan woman’s place in society and for that I am proud to belong to a place that understood equality when so many other women in other societies, much later even than our Minoan ladies, were oppressed and certainly far less equal than our proud ladies.

What we have in our hands as researchers and as history lovers, thankfully, are many ceramic vessels and frescoes that give us an evolution of the characteristic fashion of the Minoans and more so of the women’s attire. Although there is barely a single sentence that gives us an explanation as to why they dressed as they did, what we see is a certain consistency that goes from truly elaborate with enormous headdress hats to the evolution of more delicate patterns, more layers that are pleasing and fitting to the eye. It seems clearly that the Minoan ladies had pride in their dress and they most certainly had good taste in understanding colors that did not clash. I want to stay here a while as color is important to me as photographer. When they used shades of blue they made sure white was involved with a touch of black and a bit of red… Or how they knew to combine earth tones like ocher, brown, yellow and black. Did we ever invent a color palette as people, or was it right there in front of us from the origin of time itself through observing nature? Because if we look closely at nature the above colors always seem to accompany each other… Was there such a thing as a lady, for example a queen, who set the president for the other women to follow? Most likely, as we see from the ceramics, it’s the higher ranks in society who dress elaborately.

Did the queen have a dresser, who advised her on new patterns or designs or where there even designers? What appears from later findings is that the middle and lower classes didn’t fall that far behind from wearing or copying approximately similar attire. Was there such a thing as a Dior of the time who suggested to his rich clients, queens, princesses or priestesses what to wear? I’m amused by the idea, but how far from the truth can I be?

Vests seem to be a constant part of the dress code. Skirts with pleats and a folded apron like fabric would layer on top of the pleats keeping neat and tidy from the waist to the knees and then it appears the pleats played a free flowing sweep during the women’s walk and seating. The array of combination between geometric patterns on the fabric are catching to the eye. My personal favorites are all the dresses in blue tones. A perfect marriage of sea and sky captured on a fabric. My favourite fresco is the “Three ladies in Blue”,  which can be found in the Archaeological Museum of Heraklion, with their ebony curly hair tied in strings of pearls. How beautiful, so contemporary and chick they are! Overall what I see in the fresco is a certain amount of pride and passion to appear in ones best attire. I love the look of confidence and empowerment the ladies have in the ceramics and frescoes. And I know women held prominent place in society. They were not commodities, but respected and seen as equal and in my own interpretation the bare breasted attire proved that women saw themselves equal to men as they only wore vests too. It wasn’t a sign of erotica, but female empowerment.

Designers over the years have been influenced by our Minoan ladies. And we have seen similarities of designs down the cat walk. And that to me puts a smile on my face, that yet again my island had an effect on people of art in some way that needed to be assimilated.

Apaki, a delicacy for food lovers!
The myth of the mighty Minotaur