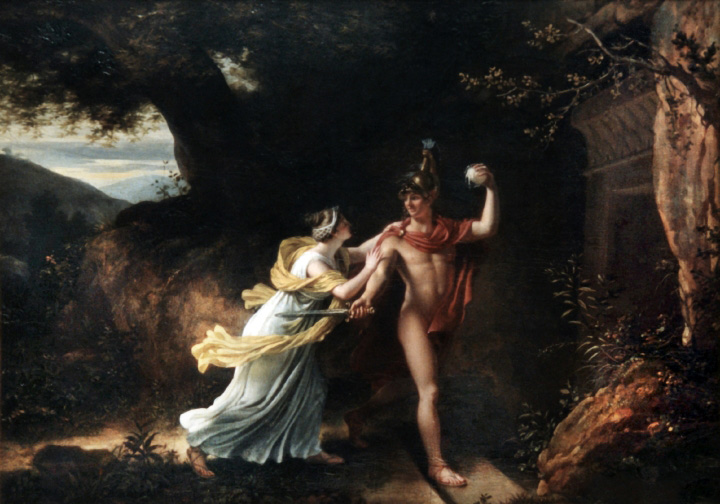 From my previous post here regarding how the beast Minotaur came to be part of Cretan history, and how its legend came to influence so many historians and artists around the world, we now must see how this legendary beastly creature came to its demise.

The poor creature Asterion, known to most of us as the Minotaur, didn’t ask to be the creature he was. This just shows how twisted an imagination and maybe a bit bored our ancestors must have been to create stories so elaborate in order to pass their time after all of the days labors were done and people gathered round a fire to hear of things they could never fathom from the mouths of those who could dream up such stories that made it through the passage of time and for us to be writing about them. So I’m personally addressing Asterion as a poor creature as he did not choose to be trapped into this half-half body where he could tame neither side of him and his punishment was to be thrown in a dark labyrinth for the rest of his life.

So as his step father King Minos had become more and more powerful in his kingdom in Crete, he wanted to gain power over Athens. The Athenians had different ideas about his grasp and did everything they could to keep him from gaining that power. King Minos having the favor of his god father Zeus asked for the plague to be thrown onto the Athenians of which wishes were delivered. It appeared the Athenians were desperate to be rid of the ghastly deadly disease so they asked the oracles for a solution. It seems a sacrifice of young men and women needed to be given to King Minos in the form of their lives being bait for the Minotaur to torment and kill. Another legend speaks of another twist to the same sacrifice of young men and women due to the fact that King Minos’ son Androgeos participated and won in Panathenean games in Athens but the Athenians out of spite for the hated Cretan king killed the said son. This spiraled a sequence of events that led to a war of which King Minos waged over Athens and won, and as a prize and out of spite for the death of his son he asked that every nine years seven youths of each sex be sent to Crete to be sacrificed and tortured by the man bull Minotaur.

When the third nine year sacrifice came around, and as this whole affair enraged Athens, the Athenians king’s son Theseus decided to take the matter into his own hands and put an end to this nightmare with the Minotaur and King Minos himself. Theseus volunteered to be one of the seven young men who would sail to Crete to be sacrificed and here is where the myth takes a completely new twist. As Theseus arrives in Crete he meets with King Minos’ daughter Ariadne. The two fall in love! Wouldn’t they though? Both princely and beautiful it was bound to happen… And being young and a bit rebellious, legend will have they girl disobey her parents’ wishes and fall in love with the enemy’s son! If something like this didn’t happen in myths how boring would these myths be?  And it seems that the -not so wise- but very clever mechanic Daedalus comes into the story once more (seriously this man in getting himself in trouble and he does have a story of his own of which I will tell in a future post) and helps Ariadne find a solution for Theseus. She is to give him a ball of string for him to take with him as he is ushered in the labyrinth to be eaten alive. Theseus wise enough ties the one end to the entrance of the long twisting and winding elaborate labyrinth so he can find his way back when he has completed his task.

Theseus took a long time in the labyrinth but it appears he came out of it victorious as he managed to trick Minotaur– Asterion and slayed the beast to death. When he came alive the history of King Minos takes a turn for the worst as his daughter leaves Crete with her new lover and they sail to the island of Naxos together. No greater insult for the king! Let alone losing his torturous grasp over Athens with no beast to eat future Athenian youths alive.

And that my friends is how Asterion-Minotaur comes to be a legend in the great passing of time and history, because a king tricked a god, a god tricked the king’s wife, she fell in love with a bull, a new man-bull was born that was a killer and the king’s daughter helps the enemy’s son to kill the monster underground. And this entire story happens on this little island of Crete in the Mediterranean…

This is what we mean when we say “be careful what you wish for” and never be too greedy in your life. Were we left dumb and mute listening to this story as kids at school? Absolutely yes! But that is what makes us Greeks what we are. We love a good drama…

The famous Cretan Knife
The genesis of Cretan wine