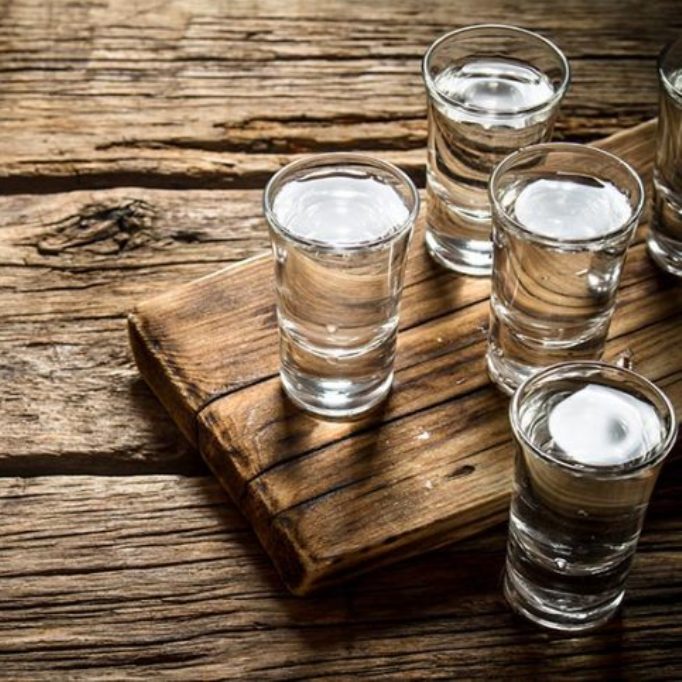 There is one particular alcoholic drink that we make here in Crete that defines us as Cretan. It has been claimed that it runs in our blood even before we are born. It marks who we are and how we show our love and hospitality and it is hard to define us as a race without it. It goes so far back in the history of our time on the island that even our philosophers would drink in its name and claim its medicinal properties and merriment. Crete is nothing without it I believe. If we ever run out of it I truly believe we would have reached the end of civilization on the planet. But what am I referring to? Raki or Tsikoudia of course.

The word Tsikoudia=Τσικουδιά comes from the Cretan word tsikoudo=τσίκουδο which means pomace, the product that is left behind after grapes have been pressed to produce wine. The word Raki, written in Greek as Ρακί and not as Rακή derives from the ancient Greek word ραξ=rax, again for the word grape. The distinction between the same sounding words Ρακή and Ρακί but written differently have a distinction of trade mark and flavour.  The Turkish Ρακή has an aniseed flavoring to it and they claimed a copyright to the name, thus us Cretans using the spelling with an  “ί” at the end of it to name our own with its distinct full body warm flavor of the drink. However we tend to use both spelling types and primarily when we want to distinguish our local drink from the rest of Greece we certainly refer to it as Tsikoudia, in order to not confuse with the Greece’s Tsipouro. Confused? Don’t be, it’s just as good no matter what you call it. But I will, for clarity, call it Raki from now on, because that is what we refer to it on a daily basis.

When Anaxilious of Thessaly was expelled from Rome for practicing magic in 28 B.C we can now be certain he had no magic wand in his hand but more the aid of chemistry working its magic from a few humble grapes and the hot-cold distillation process we all gurgle about.

Distillation has a long and ancient practice in Greece, and we Cretans certainly didn’t fall behind. We believed in the sacred powers flammable and intoxicating spirited liquids gave us. Maybe the fact we would get drunk helped us see life in a more divine matter. But don’t we all when we have had a glass or two of anything above the 25% alcohol content marker?

Raki’s final alcohol marker after it has been bottled is usually 35% by volume.

When it first comes out of the distillation spout it can be as high as 90% in alcohol content making it the most potent spirit one can drink. And being warm too hits the heart and arteries in ways no two people can feel when they first fall in love at first sight. It is that potent. I most certainly must be consumed with care.

Raki is distilled in around about the month of November after the pomace has had its time in the wine barrels and done all it can there. It now takes its turn to become a reason for entire families to come together after they have received their most coveted licence to go ahead and produce their beloved Cretan drink. The entire process has a licence of a few days only so the home producer needs to act quick while getting all the distilling gear, long tables and sacrificial lamb on a spit ready while maybe a group of Cretan musicians and singers are called upon to complete the entire affair. It truly is a day of celebration and it most certainly is a day most participants, primarily the men, will come out of it with the hearts and bellies full and happy and most certainly very very drunk… A distillation day is called Rakokazano=ρακοκάζανο which means the cauldron of raki. The amount of the spirit produced primarily lies upon the quantity of the pomace.

The Cretan varieties that give a relatively aromatic raki are Moschato Spinas, Thrapsithari, Dafni, Vilana, Vidiano, Malvazia etc. Grapes that produce sultanas are richer in sugars and create more volume of product due to the thin skin of the fruit and their lower methanol content. Depending on the variety some will give a stronger or more refined taste to the final product catering to all tastes and needs.

Thus the home producer will be able to maybe keep a few bottles for his home for a year while gifting a few bottles to close friends and family. It pays to have Cretan friends. Your hands will never be empty from gifts. We are generous in this way as people. We love to share what we have. It makes happy and proud as people.

We believe it to have medicinal properties and we love taking for anything cold related. In fact it seems to replace our doctors just nicely. We use it to digest our food and put it on our backs as rubbing spirits. In fact we will find any old excuse to drink the stuff as long as we are in the mood. It most certainly the first thing we will offer you if you walk into our home as a welcome. We love to drink it with dessert and just talk our lives away over long held lunches and dinners. I still haven’t walked into a Cretan home without it nor do I know a Cretan living away from the island without it either.

A relatively new mix of Raki is rakomelo=ρακόμελο which is a mixture of raki with thyme honey…now that is a drink I have difficulty staying to one or two shots. It is so sweet and full in flavor and it hits the spot when heated and drunk in winter. It acts faster than any sleeping pill on the market. It certainly puts a big smile on people’s faces.

So if we offer you a bottle of chilled raki or a warm bottle of rakomelo please give it try and see what all the fuss is about.