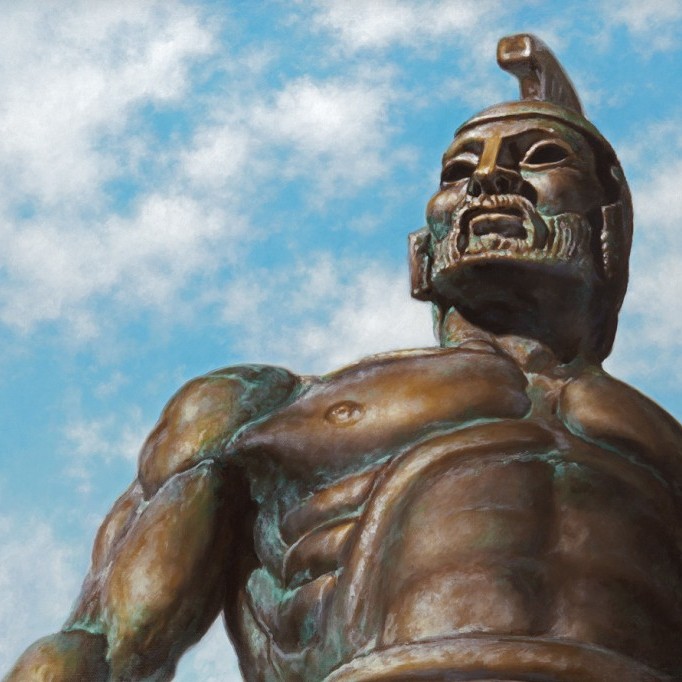 When you are born Greek there is one thing most certain to happen to you. You will be immersed in history either you like it or not. Happily I’m the latter. So when it comes to school curriculum you cannot get away from almost 5000 yr old history condensed in books, yes plural -not one history book per year but 2 at least, that span the entire breadth of elementary, high school and senior high school. That’s 12 years of getting a firsthand- just touching the surface look into who we are. If you want to know more university awaits you, having chosen the field of History, with a lifetime of getting into the details of our past, all without ever running out of material to study. Ever. I need to emphasize on that. EVER.

So the smart people at the ministry of education know if they want to attract our attention somehow they won’t go straight into the battlefields of Thucydides and The Peloponnesian War which requires quite a bit of our concentration when we are young. No. They are smart enough to know we need our imagination triggered, so they get our appetite all excited with small snippets of stories from Homer for example. His full epic text we are given at high school and I can attest it is very very long. So you can be sure we know our Iliad and Odyssey. Another example of how the ministry tickles our interest is with The twelve labours of Hercules or how the Pantheon of the 12 Gods came to be. But the one story that always excites us Cretans is the myth of Talos, the bronze robot.

This larger than life and imagination -for its times, creature was a robotic giant who is described as a human formed winged protector made of bronze. He had a singular vein that ran from his neck down to his ankle and the vein was plugged with a screw that kept the ichor (ιχώρ) in its place. This was the equivalent of blood but in the form of a liquid gold essence destined only for gods and immortals of mythology.

We Cretans love the fact that we get first grabs at the concept of robotics and technology. Can you imagine us around a table with foreign visitors talking about technology? All of a sudden we say “Well if you want to know we are the first to have created a robot”…. I’m not sure how we are perceived, but you can be sure we are proud of it even if it is a myth.

This immense, bronze robotic giant was a gift from Hephaestus to King Minos of Crete, while another legend says it was a gift from Zeus to Europe, who is the mother of King Minos, after Zeus had abducted her and took her to Crete, as her protector while living on the island. No matter what is true of the myth so far one can already see how fascinating it all is.

Talos had a dual role; he would be supervisor of the law which he kept written on bronze plaques while the other was to fly over Crete three times a day to make sure it was safe from invaders. Because of this, it is said -maybe in jest, that Sir Arthur Evans, who excavated Knossos in Heraklion,  that one of the reasons there are no outer walls to protect the island are because of Talos and he called this fact pax minoica –Minoan Peace. If Talos were to see an enemy on the island he would immerse himself in fire to heat his body up and then embrace the enemies killing them in his bosom! If he were to see ships approaching the island he would throw large rocks till the ships sunk…

But even he, like all gods, semi-gods and immortals had a weak spot. And for Talos his undoing came from a not so lovely lady called Medea. She was hard to resist and even harder to outdo and knew what that weak spot was. Medea seemed to have the power to manipulate whoever she set her eyes on. So she, with Jason and the Agonauts whom she had already seduced, on the vessel Argos ended up on the island of Crete as they had sailed a long adventurous trip from the Hellespontus straight -now known as the Dardanalles straight,  and they needed to rest and get provisions. Upon reaching Crete Talos begun throwing rocks at them. Medea needed to outsmart him as he couldn’t be killed by obvious means.

So she begun to talk to him from the ship and convince him that he needed to remove the screw from his heel as Zeus put it there to stop him from becoming immortal. And he believed her. So he took his own life by removing the screw and all the ichor ran out of his body which was his immortal blood and the robotic giant fell to his fate… You can imagine all of us kids with mouths agape listening to our teacher telling us this story? What I remember after she had finished was silence… we were all looking at each other until one of the boys said “Idiot” and we all broke out laughing, but we felt gutted.  We wanted him to continue living even in myth and not be out done by cunning and deceit I guess so he could exist somehow and still guard our beautiful island in the Mediterranean Sea.