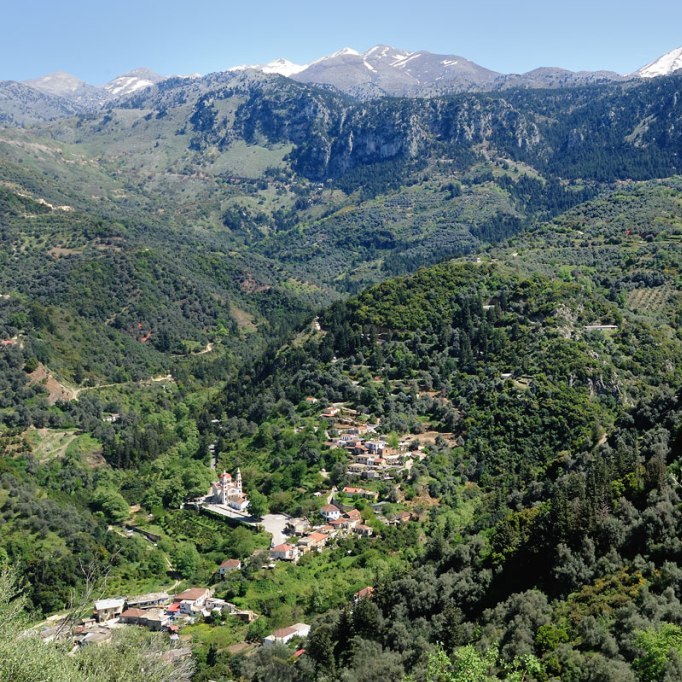 On the foot hills of The White Mountains in the prefecture of Chania, the gorge of Sarakina in the village of Meskla is a little place of wonder waiting to be admired by those who seek to see nature at its best and off the beaten track. The name Sarakina seems to derive from the Saracen pirates that used to loiter the area and cause havoc to the locals with their looting and brutal behavior. It is believed that the gorge was their hiding place as the lush surroundings of it can support this theory.

I found this gem of a gorge many years ago and I rallied friends to find out what it was all about.  The beautiful village of Meskla is 200 meters above sea level on a hillside while the White Mountains are situated behind it. The whitewashed church of The Assumption of the Virgin Mary, is the first building that welcomes the visitor. What is distinctive about this church is the existence of a much smaller one next to it, again named after the Virgin Mary, which was built on the foundations of an ancient temple devoted to the Goddess Artemis. The village hasn’t had archaeological digs but throughout the area old coins are found and old foundations that appear from time to time as proof of ancient dwelling.

Close by the church but further down the road is a cluster of enormous monumental plane trees that give their highly desired shade to the open sitting area of a tavern in the summer. Meskla has a river where the melted snow of the White Mountains runs through the village named Keritis. This makes for lush green surroundings and a haven for flora and fauna to thrive and live. In all this lush forest houses are scattered on the hill popping through the green landscape.

The path to the gorge itself is further down the road still from the tavern with the plain trees and a few signs lead to its entrance. It takes about 10 minutes of walking on a dirt road before reaching the riverbed. From there we walked along the river and followed a path the leads to a wondrous ravine. It is hard to describe how tall and beautifully curved it is as it engulfed itself over our heads! We stood admiring this part of the gorge for quite a while just in awe of how the force of water over the centuries has carved the limestone. I could certainly understand how the gorge could be a hiding place for pirates! My imagination was running wild as to how they found nooks to hide there and raid the nearby villages when they were thirsty for more distraction and havoc! But the ravine is so beautiful and hard to accept how it could have been used to hide such sinister villains in the past. The ravine is nature’s art, where nothing is in a straight line, but most certainly perfect to look at! We had chosen, thankfully, to make it a picnic day while we were walking through this marvel of nature hidden away in the small village. We found one of many spots on the path to stop and just admire the view while we had a bite to eat and listen to nature’s sounds that dominated the area. We loved it so much we took our time to rest and relax and only then did we slowly make our way back to the village.

All in all the gorge itself is not longer than  of a kilometer but if you want to keep walking you can follow two paths, one that leads higher up to the village of Zourva, about an hour to reach there, or follow the path back to the village of Meskla. We chose the latter to admire and rest under the oasis of the monumental plane trees before we went for an afternoon swim at Kasteli bay and coffee while looking at a gorgeous sunset. If anyone was to ask me I’d recommend they did the same as I place it high on my list as my favourite places to visit.

The gorge is only 30km from Villa Terra Creta and a must for those who choose to do and see something different away from town. You could have an entire day out with a picnic lunch in the gorge while finding close by beaches to enjoy a swim and a cold drink or coffee with a great sunset.