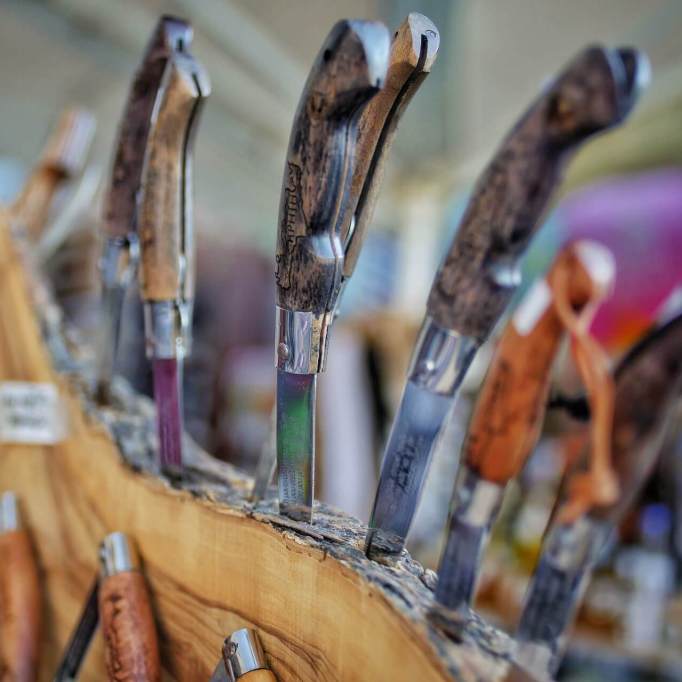 Humanity’s need to possess a knife equates with the need for survival and the leap to civilization from flight or fight, to fight and evolve. Crete does not differ in that respect and it is evident how our need to possess a blade of some sort dates back to the Stone Age. Crete is rife with flint blades that are found throughout the island when archaeologists arrive to dig for new evidence, or, if you are lucky enough you just might find one if you look down in the rich red soil of our island.

It does not come as a surprise to find flint blades nor does it become a surprise when it evolves to something more robust like the first double edged copper and steel blades we find in the Mycenaean and Minoan ages. However the quality of the blade becomes better as the steel and knowledge how to forge it became the mastery of the smith through the ages. Crete having gone through so many wars and so many kingdoms it needed to provide blades to the fighting men, but also to the hunter and gatherers who would lose themselves in the high mountains for sheer survival. The home cook could not go without a knife and archaeological digs always surface knives in kitchens from our late ancestors. This I guess is no different than it would be for so many other countries around the world. But we do differ just a smidgen…

Crete seems to have a tradition of a particular type of knife that looks like a semi crescent dagger. Small, slightly

curved in its shape it varies in sizes from very small; barely being distinguished from a toy knife, to a 50cm or even longer impressive dagger so when it is nestled in the traditional Cretan male dress belt it can inadvertently draw in your attention either you want to or not. This type of knife seems to be a type of copy of what the Ottoman Empire brought with it as the Ottoman soldiers liked to fight in arms close to their opponent so they could dig deep and do certain damage to their enemy.

The knife that is most popular and distinguished as purely Cretan is one that comes with a case that holds the knife which is called foukari=φουκάρι. The amount of intricate detail and design that goes into the case is wondrous. Each blade case has its own unique patterns and plumes depending on who the owner will be, thus each knife is made bespoke to the character and psycho synthesis of the beholder.  Knife smiths most of the time are listeners. They welcome the client into their shops and listen, observe overall and read the body language of their client before they try to offer a knife that is already made. However there are many occasions when the knife will be gifted and a bespoke order will be made to suit the personality of the owner.

It is said here in Crete that you cannot lend a knife to another as the knife itself is only responsive to its rightful owner. True or not it appears to make a certain amount of sense to me. The handles are made out of animal bone or horns from goats or rams. Nowadays clients from other parts of the world will show up with their own material they would like the handle to be made with. The most expensive knife is that which is made from silver entirely and it can cost a fair penny to the buyer. They are truly amazing pieces of art and are definitely worth looking at. I’m sure the knife smith would be more than proud to show them to you.

Although knives have been forged by smiths for centuries in Crete, we have what is known as the “Knife Street” in Hania or else Maheradika=Μαχαιράδικα. The only reason why it became a street full of smiths making knives, serves the same sense as all other professions did back in the ages as they would form a type of guild. So if there was to be a dark, fire burning hot smith in one place it made sense for another to join adjacent as to match the need and feel of the neighborhood. This type of bonding of the same profession can be seen in Europe and most extensively in Italy and France.

The blades themselves are made of stainless steel and were carved with some plumes and designs in the 19th century but as time went by more personal notes were carved on the blade and our rhyming couplets called mandinada=Μαντινάδα are now carved on the knife. This begins to appear in the 20th century and beyond.

The smiths themselves are all good friends until they walk into their lab and try to outdo themselves with the best made knife. The amount of pride you see in the artist is touching. They caress and hold the knife with respect and care. I do not know a Cretan who does not have his own Cretan knife at home. And I certainly know how many people will spend a fair amount of money to offer them as gifts. They are, after all, a piece of art first and a weapon to do harm last.

Crispy crunchy sweet! The Cretan Kserotigano/Ξεροτηγανο
Minotaur-Asterion and his demise