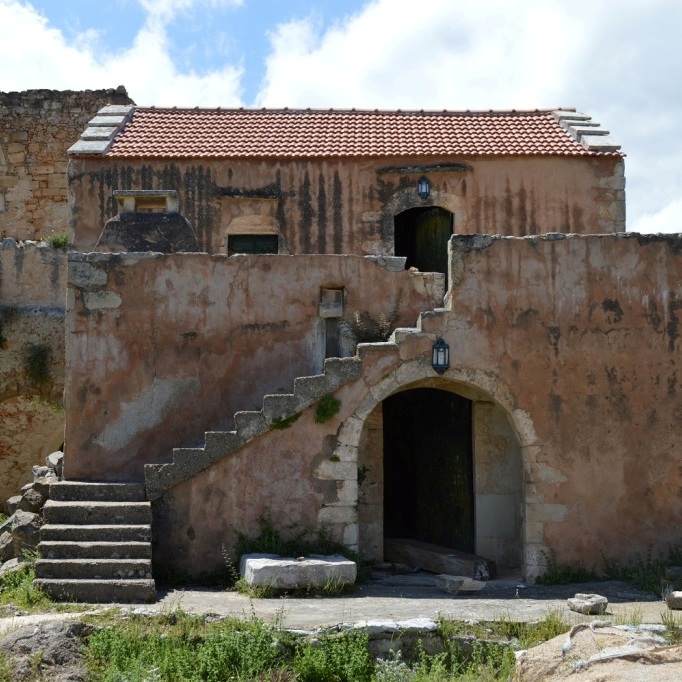 There is a monumental villa complex partly in ruins in the village of Embrosneros in the prefecture of Chania of which very few people know about that has such an immense and intense history. And this villa is called the Tower of Alidakis.  The villa itself is a large complex of structures that span a few acres all of which hold an array of different architectures as buildings were added over the years beginning from the Venetian occupation to the late 1960s. It is absolutely worth visiting and seeing how this once feared and -as contradictory as it sounds- revered place which actually sits in such a beautiful and quiet village.

In 1770 a man was born who would become, without a doubt, one of the most loathed figures in Cretan history, the Janissary Ibrahim Alidakis. Janissaries were initially ordained as such when the Ottoman Empire needed military to look over their conquests and the only way of doing so was by abducting young boys of conquered lands, schooling them into the Ottoman hard handed way and training them as soldiers. Alidakis was born at a time in history when some of these rules became lax and he took it upon himself to become Pasha in place of the Pasha by disobeying them. The local Pasha in the prefecture of Heraklion himself had become afraid of him as he had gained too much power and land making him a dangerous threat.

Alidakis was born in the Prefecture of Chania and ruled over the entire area of Apokoronas. He had his villa on an elevated spot in the village of Embrosneros permitting for visibility over the open vistas for miles. His thirst for power had become so deep he kept taking by force any plot of land that came into his way and enslaving the owners to serve him. Even if there was property that he might not have owned he would make sure the owners always gave half of what they produced to him. His need to be feared was such he made sure men and women were punished severely or sentenced to death if they dared raise a complaint or revolt against him. He had his own paid military; even men who didn’t want to join him had no choice as they feared for the lives of their loved ones. He would break the backs of old men by putting them thorough hard labor and beat them to death if they couldn’t keep up with the work. He had a harem of enslaved women and in the evening he would sit in his front veranda and look out over his wealth of lands. Sometimes he would  punish men and women to entertain his guests and for his own amusement for minor incidents he deemed worthy them of punishment.

In his greed to gain as much land as possible he begun to ponder how he could take all the land from the people of Sfakia more than 16km from Embrosneros. His land had already stretched all the way to Chania town and the border of Rethymnon but thirsty for more he aimed at the one place that could never be conquered and that was Sfakia on the northern shores of the prefecture of Chania. The people of Sfakia had their own rules and were fearless people. Alidakis made it his personal bet to take what he could from them. And that deemed to be his downfall as the men and women of Sfakia wouldn’t stand for such an insult as they were provoked by him many times in the past. So they gathered council and decided on an early morning attack to finally rid the land from this bloodthirsty torturer. What is extraordinary about this attack is the presence of women. As so many men in the villages were killed and in hiding from so many attacks and revolts in the past, the women were adamant to help although the men initially were flatly against such a decision. The team reached Alidakis’ villa by dawn and from there with the aid of some gun powder and pistols

Alidakis and his men found their death. The amazing thing about this is the lack of help from the other janissaries as they were tired of Alidakis and his barbarous antics so they left him unaided. His loss was over 200 paid military men while the people of Sfakia lost eighteen men and two women. When the gates of the villa opened the villagers took all of his provisions and spread them to the villages. They were astounded at the amount of food he kept in is cellars while everyone around him were starving! A great feast was to be had on the night after the burial of the dead of Sfakia were taken care of. And so goes the life and death of the formidable Ibrahim Alidakis who had spread fear for 60 oppressive years…

The beautiful Sarakina gorge
St Rocco of Chania protector from the… plague!