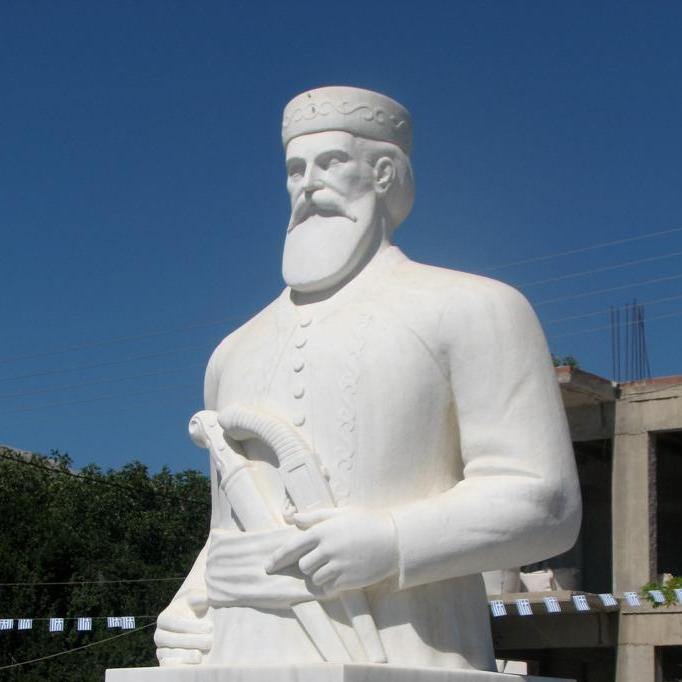 There is a man here in Crete whose name has been given to the airport of Chania. His name is Yiannis Vlachos Daskaloyiannis. Daskaloyiannis is a nickname that was given to him after he returned home from his studies abroad. Vlachos was his paternal surname. He was born in the northern seashore village of Anopolis in the province of Sfakia, in the prefecture of Chania, with dates of birth claiming either 1722 or 1730.

He was the son of a rich ship owner who could afford to send his son to study overseas, something so rare in those days, thus giving him his nick name of Daskalos=δάσκαλος=teacher  to indicate his education not his profession. Thus with a combination of his name Yiannis & teacher he became known as Daskaloyiannis. Little did he know then his name would become one of our most prized heroes of the island, and why in the end to honor him in the only way we knew best was for this name to be mentioned far and wide by many visitors to the island from across the globe and maybe get to know how he tried to save our island from Ottoman oppression.

Sfakia as a province fared better than the rest of the island due to its geological make up. Mountainous and hard to reach it is hard for invaders to conquer and defend its shore on the north side. This gave the province an advantage over the villages and people in it. With the locals knowing better where to go in the many ravines and gorges, how to hide and how to defend themselves, the Ottoman Empire had a decree made for them to keep to themselves as long as they were not a problem to the oppressors.

Daskaloyiannis however couldn’t stay idle and see his fellow men across the island waste away by the iron sword of the Ottoman Empire and although not owing the island any act of bravery he felt the endurance of the people were tested long enough and he desired to help them change the status quo.

As a rich ship owner himself and with relative semi autonomous freedom from the Turks to roam the Mediterranean Sea, Daskaloyiannis could trade and be in contact people of letters and politics who had a better and wiser view of the world at large and how to get help to change situations that needed attention.

One of those instances led Daskaloyiannis to meet the brothers Orlov in Trieste in 1769 who were emissaries to Empress Katherine the ΙΙ. Her desire was to lift Ottoman oppression from Europe and would help anyone who would revolt against them. Daskaloyiannis with promises of aid and support from Russia bought as many arms and provisions possible and returned back to Sfakia to gain the support from as many village chiefs as possible to begin the revolt.

Having succeeded in receiving the support of twelve chiefs and many men willing to lift the iron grip of the Ottoman rule in 1770, Daskaloyiannis and his men managed to set chaos to the island and create great discomfort and deaths to the Turkish army. There was one problem however while the revolt was on its way. The aid from the Empress never came. As much as he anticipated the much desired help, he was informed that the ships full of men and ammunition was never to come.

This put a great deal of pressure on Daskaloyiannis as he realised he had jeopardized the lives of so many Cretan men, women and children, many killed and many trying to escape slaughter from the Turks.

The pasha of Heraklion had put a price on his head and asked Daskaloyiannis to surrender. As much as he would resist, the thought that some of his children and siblings being already caught and thrown in prison in the castle in Heraklion made him believe the enticing promises of the pasha that he will be treated fairly only to trap him the minute he stepped his feet in the town.

Trying to buy time Daskaloyiannis, although in prison and being tortured managed to stay alive while incarcerated by convincing the Pasha that the Russian aid would come and their time on the island would end. Unfortunately the Pasha got written confirmation of the opposite, with this information he felt it was his duty to make an example out of Daskaloyiannis and chose a public holiday to end his life in public view, surrounded by hundreds of people. Yiannis Vlachos Daskaloyiannis died a slow torturous death by being skinned alive on the 17th of June in 1771. That was his punishment for desiring to see our island free from so many years of oppression. We see him as our martyr as he owed us nothing yet he did so much. He is has a place in all our hearts.

We, as the people of this island, owe him so much but most of all we owe him our respect for trying to give us our freedom. Thus local authorities have named the airport of Chania to honor his selfless bravery. He has been honored with statues in public squares in Crete and Athens also while streets have been named after him too. The province of Sfakia have him on their flag, while a boat if named after him too.  A memorial is held on the date of his death in his province of Sfakia each year with wreaths laid by his statue.

His bravery and selflessness is an example that has helped us as people to endure the barbaric grip of the Ottomans but in the WWII too. We dance his Pendozali to gain courage where it is needed most. We owe him so much and in a way I hope his spirit sees our gratitude.

See how Daskaloyiannis begun his revolt and how his Pendozali and music so uniquely Cretan by clicking here.