The myth of the mighty Minotaur 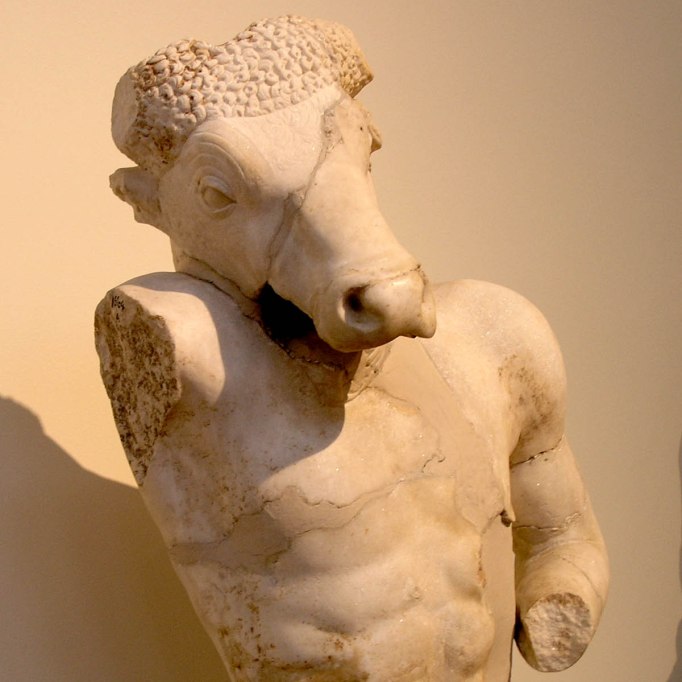 I’m taking you back into our elementary classroom where the cunning Ministry of Education knew how to grab our attention because Greek history in our scholastic future would be the longest ride ever. So they had to make sure they had our devoted focus by teaching us myths. We have so many of them. But I will tell you about one a great portion of the globe might or might know about.

The word Minotaur comes from the compound nouns Minos + Taurus. Minos was the King of Crete and Taurus means bull. What a great majority of people do not know is that the Minotaur actually had a name; Asterion. Asteri = αστέρι means star in Greek so it is most likely the constellation of the Taurus stars in the sky just might come from this mythical creature because astronomers love giving unique names to their new findings as far back as Galileo and beyond.

How this mythical creature came to be is utterly beyond anyone’s imagination you can only fathom how our own young minds took a wild ride trying to make any sense of this insane story.

Minos wanted to become king of Crete as he was the child of Zeus and he felt it was his divine right.  But he had a brother he needed to overthrow as a contender. Minos convinces the god Poseidon (his uncle) for his intervention and promises to slay a bull as sacrifice if Poseidon helps him. Poseidon convinced and fooled presents a magnificent white bull that rose from the depths of the sea for Minos to sacrifice. Minos taken by the animal’s majestic presence tries to trick the deity and sacrifices another bull in its place. And this is where things begin to go a bit too wild for one to believe…You see Poseidon gets angry and he wants to revenge Minos for becoming king through trickery. So the god thinks the unthinkable: he makes King Minos’ wife Pasiphae fall passionately in love with the majestic white beast. I told you it gets crazy…

She is in such a frenzy for the animal she seeks the help of Daedalus, the great inventor and father of Icarus who built wax wings and flew too close the sun…but I’m getting carried away as this is another story of Crete for another day.

Daedalus convinced (how can one ever?!) by her passion to make love to the white bull creates a hollow shape of a heifer of which Pasiphae slips into and love is made and a pregnancy is achieved and all of a sudden Greece has a crazy story to tell about a creature born that is half man and half bull. I wonder how she felt when she saw this love child? No matter the result she nursed the beast but legend says it became ferocious in its appetite and wasn’t just happy with breast milk and soft child food as it grew to its monstrous proportions. So his appetite begun to seek human flesh and that became, as one can imagine, a bit of a problem.

King Minos in the meantime had to deal with this cause and effect situation as his greed for the throne had caused all this insanity and all of a sudden he had more than a kingdom to deal with. How was he to deal with this beast he knew not, so in the story come the oracles at Delphi with all their mind’s eye wisdom and advised him to place the beast in an enormous labyrinth.  Again Daedalus’ assistance was sought after (you would think he would steer clear from this whole situation by now but some people don’ t seem to become wiser from their mistakes) and a labyrinth is constructed for the beast to be thrown in and live in the dark, hungry and ferocious for human blood. Apparently legend says the labyrinth was near or under King Minos’ palace. Maybe so its mother could have a bit of a catch up with the creature? Who knows… But a problem still remained. How this beast was to be kept satiated and happy as to not re surface and cause havoc to the kingdom.

King Minos was trying desperately to conquer Athens and was laboring for many years without success so again he asks his father Zeus for help in the form of the plague and hunger. The Athenians desperate to be rid of this catastrophe ask the oracles for advice and they come up with the worst advice ever: The sacrifice of seven young men and seven young women being thrown in the labyrinth and eaten by the Minotaur and however made it out would be free to live their life as wanted. Accounts differ if this is the true story of how the sacrifice of the youth was acquired or if it were done yearly or every nine years, truly does it even matter as the entire event is horrific?!

How the Minotaur found his demise is an entirely new story I promise to write for you in another post in the near future.

So can you imagine us kids sitting at our desks listening to all this and I ask you how is it possible for us to not stay awake at night and not be afraid of the monster…Thank goodness we all grow up and understand the difference of fact and myth. Buy we sure do know how to keep ourselves entertained as a nation. It’s no exaggeration that we have drama in our blood…