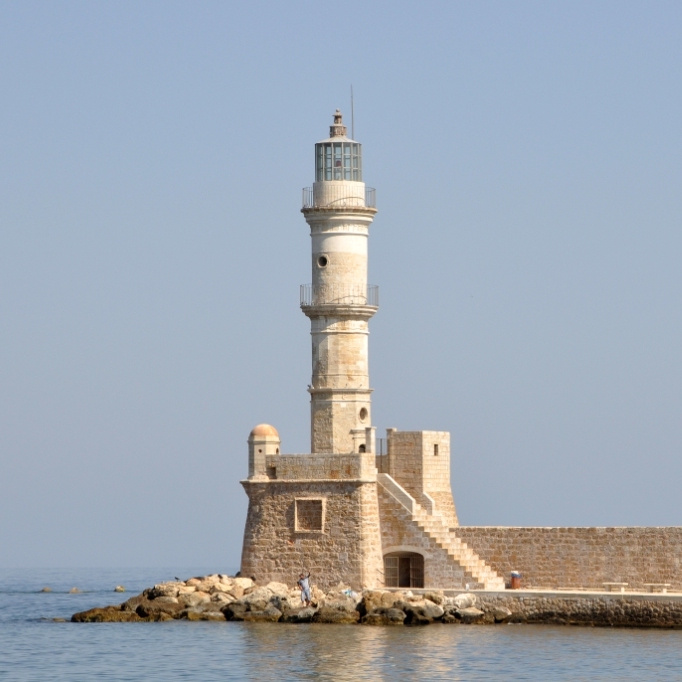 If there is one landmark that dominates the bay of Chania, it is without a doubt the majestic Venetian lighthouse. It is our beauty in the bay. Anyone born or raised in Chania knows that our identity begins from this elegant lady standing proudly from the 16th century making it part of our lives and our comfort as we regard it as home. When asked what a visitor should see upon first arriving here, we answer without hesitation that they visit this unique monument.

How this proud structure came to be has an interesting history and we need to step back in time when Venice was a dominate powerhouse in the Mediterranean. The Venetians having occupied the island understood Crete’s strategic position thus allowing for serious trading through shipping. The need for a harbour and lighthouse to be built is first mentioned and approved by the local government in 1302. It will take two more centuries for the first lighthouse to be built, between 1595-1601. With the distinct Venetian Lion of St Mark carved on its base -now long gone- its initial design did resemble other lighthouses of its time with an open flame and the lighthouse itself identified as a beacon. When the Venetians faced a threat by sea a chain would be stretched from its base across to Firkas fortress in order to destroy the bow of invading ships.

In 1645 Chania falls into the hands of the Ottoman Empire and the port with the lighthouse become derelict from neglect as the Ottomans preferred to use the natural deep port of Souda for their sea trade.  Only when the Egyptians are gifted the town of Chania in 1830 as thanks from the Sultan for their services in the oppression of the Greek revolt in 1821, does it receive long needed restoration.

In the decade of Egyptian rule many improvements were made in Chania including the overall repair of the lighthouse and port. A total of 1,146,000 piaster was provided (11.460 golden Ottoman lira, one lira was 6.615 grams of pure gold!!)  in order to see the entire cantilever, deepening of the port and rebuilding of the lighthouse. This was an enormous amount of money for its time.

With a new three sectioned minaret shape and sturdier to withstand torrential weather it now had an octagonal base, a sixteen-side middle and a cylindrical top. Its architecture is an amalgamation of different eras making it one of the most unique lighthouses in the world and the oldest one standing while fully functioning. At night its red light can be seen from seven miles away (11.27km). It does not have a lighthouse keeper as its close proximity to the harbour doesn’t require one although during the 19th century a tiled house at its base was built for one, but was taken down in 1967. Its lighting mechanism was destroyed in 1941 by the German occupation and was restored with a red beacon in 1945. A final restoration was done in 2005 giving it its final and strongest structure to date.

So this over 400 years old beauty has withstood the test of time and graces the harbour beckoning our attention like no other monument in the Prefecture of Chania. It is one of the most photographed lighthouses in Europe and on many a person’s bucket list to see and walk to and admire the port from a different perspective. At sunset it gets bathed in golden amber light and it becomes a challenge for photographers to capture while the sun passes through its glass panels and the light disperses in all directions. It’s a sight made for true romantics who believe in evening magic. At night the structure is lit so your eyes never miss how majestic it is, changing once more into a new hued shape while dressed in its evening gown. And then the rhythmic flash of red at its top sends its signal out to the world to keep seamen and their vessels safe and not reach the natural lagoon of the harbour.  When I’m away from home and travel overseas this is what I miss the most. And I dream of it often and I know is time to return home. I’ll never forget the first day I walked up to it. It struck me how tall it is and how safe I felt there. When I need to take some time to think I walk up to it and look at our town from its view point while the White Mountains dominate towards the south and how the Cretan pelago opens up towards the north. And for some reason I feel more at home than anywhere else in the world…