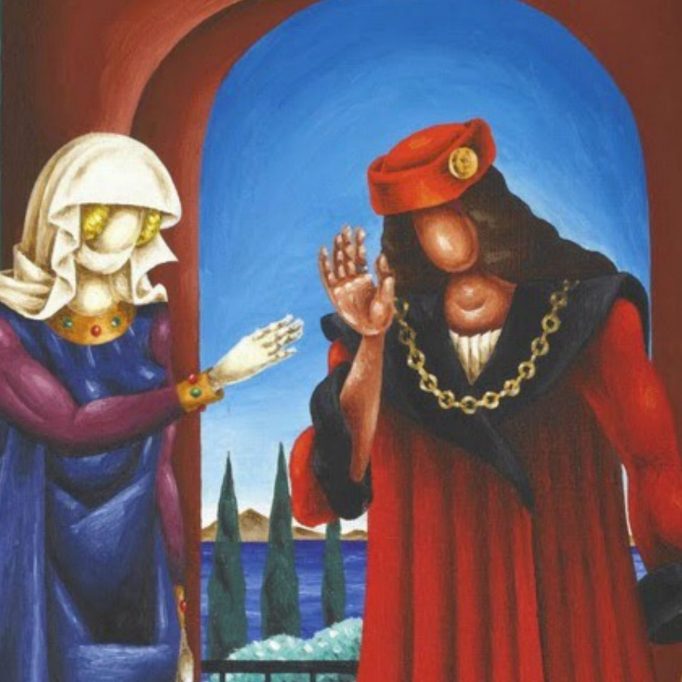 Crete cannot be without Erotokritos and Erotokritos cannot be without Crete. He is the protagonist of a love story imagined and turned into a book with over ten thousand, fifteen syllable rhymed verses by a Cretan poet and story teller named Vincenzo Cornaros. Cornaros was a man of Venetian origins and wealth who belonged in a literary group called Accademia degli Stravaganti (Academy of the strange ones). This alone, when we were first taught of him as students, won me over to like him as being a quirk. Born in 1553 in the prefecture of Sitia he was affluent enough to be educated, well read and influenced by the times when stories were written in verse.

So Crete has been honoured by the Greek ministry of Culture to call 2019 the year of Erotokritos. But who is this young lad who gets to receive this tremendous honour? Conrnaros wanted his protagonist to be a valiant, loving and caring young man who was brave and loyal all at the same time. It is a story with a very happy ending, with a king, of course the beautiful daughter of the king named Aretousa who is the love interest of Erotokritos, princely suitors, a touch of magic, jail time, jousting competitions, moments of anger, frustration, curses, forgiveness and elation. Aretousa, naturally, in the course of the story has a trusting, loyal old nursemaid by her side, because ladies of the day simply couldn’t just roam freely without a chaperone to save them from being misled by some man with sinister intentions. How far we have come since then…

The short of the story is this: Erotokritos is the son of a trusty advisor to the king who sees Aretousa and falls in love with her but knowing his lack of nobility cannot express his love to her and decides to serenade her instead under her window at night, the girl by degrees falls in love with him but the king becomes aware of this and tries to arrest him. Erotokritos manages to escape and knowing he will never have a chance at ever getting the girl decides to exile himself  to Chalkida

and try to forget the girl. But his father becomes ill and Aretousa visits the trusty ill advisor and while attending the sick man gets to see the letters and sketches Erotokirtos had written for her. Her father meanwhile tries to find her princely suitors that might trigger her interest. From here on a cascade of events ensue which lead to a happy ending for the couple that goes through a throng of adventures and misfortunes before they are happily united.

We Cretans simply identify something deeply rooted inside us with this story. Vincenzo Cornaros is so well loved and considered one of our most prized writers. What is more astounding and unheard of for the times was the reprint of the book. That was remarkable for the 1700s! It was valued to such an extent it would be one of the items listed in a will to be inherited from father to child! Even being a reason for families to come into argument as to who would inherit the precious publication!!

Cornaros was intelligent enough, in my mind, to understand that if he wanted everyone to love his work where he lived at the time, he had to write it in Cretan dialect. There is a particular pattern that appears to exist in that daialect: it rhymes. Our Cretan Mantinades (a type of four lines verse that rhymes and always has a musicality to it) are so well known to all other Greeks who have nothing similar in form of verse that comes with a region. It is uniquely Cretan! In fact many of us seem to be born with the gift of popping a new mantinada in our head simply by being asked to do so! Even more due to its popularity it made Crete known to those scholars  who were curious to know who this Vincenzo Cornaros was, who took on such a task, making him the talk of his time. But that is not the reason why we love the story so much. We love it because we can essentially sing the verse, and myth has it that the first recorded notes to accompany some of the verses with another well known and loved Cretan singer, Nikos Xylouris with his characteristic smooth voice, is music unchanged from the very first time of the book’s publication! So that makes the music 306years old!!! The first chord that sounds from the Cretan lyra makes every single Cretan I know feel emotional and get goose bumps run us all over. I’m even getting them now just thinking about it. It seems we wanted to love this story in order to simply forget so many years of oppression by so many conquerors and to finally feel that happy endings do happen even if they might be fictional. It needs little mention that it is taught in schools here in Greece as esteemed literature and many homes have the book as I do too when I bought it with my first pocket money many many moons ago. This year will be an excellent opportunity to get to know the writer and the story as Crete throughout its prefectures will be holding all manner of cultural events to honour the writer and Erotokritos himself. So if you love a great love story, when you visit Crete this year, seek out those events. I know I will for sure.

The Journey begins
The Concubine’s well