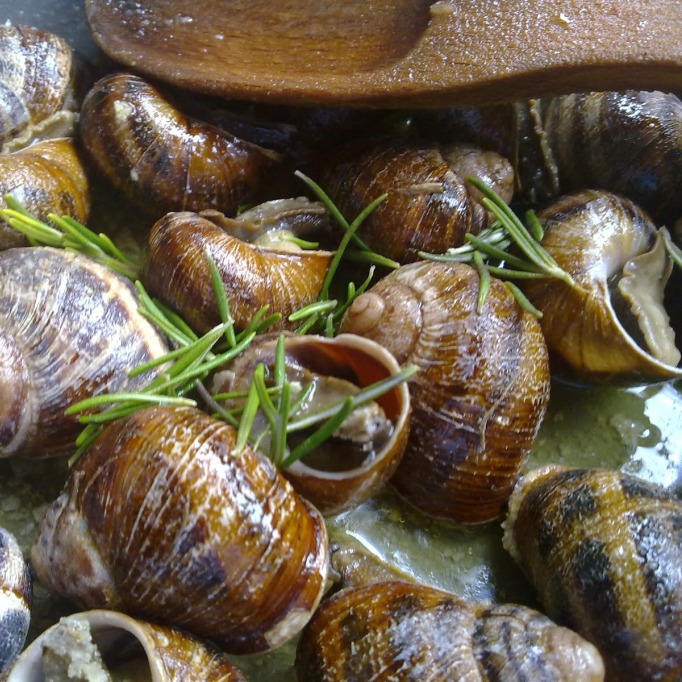 What if I told you a story of how snails saved Cretans from starving to death? Snails or Chochlioi = χοχλιοί as we call them from the ancient Greek word Choclea have been a staple in the Cretan diet for centuries. Their shells have been found in ancient excavations and most importantly in the kitchen. It seems our slimy, slow, grass eating friends have been a staple in the culinary world of our ancestors since the beginning of Cretan history.

Snails are high in protein. That makes a world of difference to the diet of someone who might have next to nothing to eat when it comes to animal protein in times of severe hardship. And Crete has had its own fair share of it on a grand scale several times over.

When Crete was sold for 75.000 gold ducats to the Boniface of Montferrat from the last Byzantine lords, a lifelong struggle begun for the people of the island to work hard for their food and labor in the fields, not only for themselves to feed, but for their conquerors too. All of a sudden where there was a sense of abundance and prosperity on the island, rationing and taxation became the norm and the majority of it came from produce that was sold to pay taxes. A great deal of the produce sold was forwarded to Europe and the rich salons of Venice where nutritious Cretan food was enjoyed.

The same happens when the Ottoman Empire takes over from the Venetians with the only difference being that rationing and taxation becomes even more severe and more punishing than ever.

While Crete healed her wounds after ridding all conquerors after many revolts and many years of Ottoman Rule she goes through a time where she can stand on her feet and put herself through a sense of normalcy. But while doing so snails still remained a staple part of the diet and still does today.

But what do snails have anything to do with all the above? They have a primary role to play as to why Cretans managed to nourish themselves not only with olive oil which was, and still is, abundant on the island but with snails and their protein. Due to the islands temperate weather snails have a prominent presence on the island. They are collected well into March when they have had their share of grass to feed and water to make themselves plump, but also due to the fact they have reached maturity after January’s hatching. In Crete there are two types of snails that are collected to be eaten; the winter common garden snail and the summer thin, white-shelled snail that likes to hide in the crevasses of bed rocks close to the shore or near the base of hills and mountains.

When they are collected, they are washed and fed in order to rid their intestine of any impurities, then two things happen; either they are left to hibernate in their shells forming their characteristic white sheet over the opening of the shell and consumed at a later date, or they are cooked and eaten after feeding in several ways: 1) pan fried with rosemary and vinegar call “Boubouristi”, extremely delicious and one of my favorite ways to be eaten. 2) As a stew with potatoes, zucchini and grated tomatoes with a generous amount of olive oil. 3) Boiled neat and eaten with just a touch of salt and vinegar. 4) And lastly made with soured milk bulgur wheat and tomatoes.

It’s not a protein source the rest of Greeks choose to take up and use in their kitchen but we Cretans love our snails. We make a lot of noise trying to suck out the morsels and it almost appears we are at war with the snails while you hear slurping and tapping of forks on the shell. Hands and mouths get messy but so do our clothes.

It is said that during the WWII when the Germans would roam the villages and make sure no revolts were underway, many of them would literally just walk in the kitchens of the poor Cretan farmer and look at the pot full of snails and laugh at the state of the meal. Little did the Germans know that the food they laughed at, while stealing the more robust produce off the Cretan farmer, was what saved the Cretans from starvation along with edible greens and carob husks. It is said that Cretans fared better in the war than any other Greeks due to the island’s position and edible flora along with the temperate weather to provide seasonal food year round.

So when you see that little slow slimy fella next time in your garden, maybe give him a more culinary interest and give a Cretan recipe a try and see what all the fuss is about.