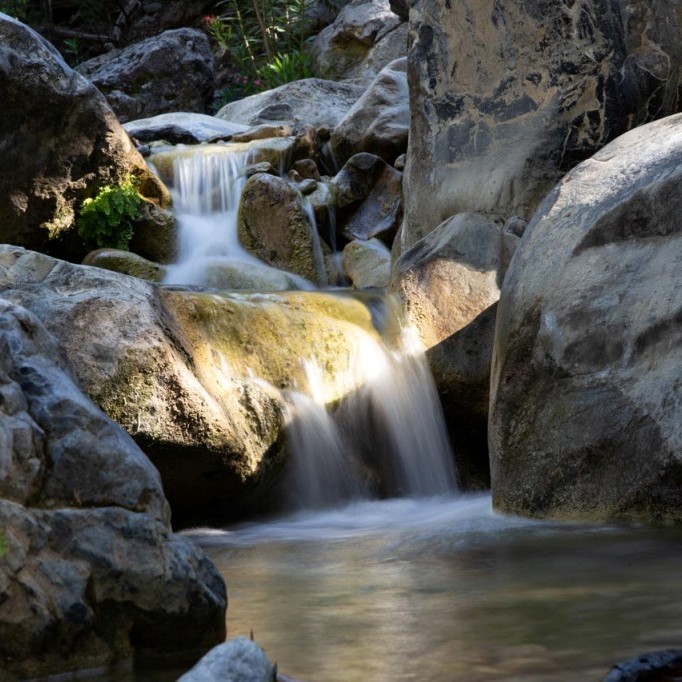 We have a unique gorge here in the south of Crete so many people have walked through over the years to experience its grandeur and immense scale. It stands like a gargantuan giant with its arms open wide to welcome you in its depths while you enjoy its alternating environment. From alpine crisp green high altitudes, to deep ravine freezing streams and river, it is the most southern gorge in Europe and our own Cretan pride and joy. It is none other than the Samaria Gorge.

It is categorised as one of the largest gorges in Europe and  one of the longest to walk through. All 16 kilometres of it make you appreciate its diverse habitat and size. Its level of difficulty to go through it nowadays permits all ages to walk it down. Going up is an entirely, very difficult task. For many years up until 1962 in the belly of the gorge there was a village with inhabitants that have now moved out. Looking at the village alone, called Samaria, one can only wonder how hard, but at the same time, how safe the lives of the inhabitants were. Apart from the fact that is a haven for endemic flora and fauna with the most prominent being our widely known wild goat called Kri-Kri, the gorge itself apart from being a wonder of nature is a highly historical one. It has played an enormous role on the island’s history and that is due to its formation.

The gorge being so tall and long and steep at places has always been the perfect hiding place for the locals over the years and a menace for all our invaders. So many events and stories have unfolded in it and so many voices seem to echo to this days from the variety of separate events over the centuries that can fool one into believing that it has been a national park and nothing else. But far from it, the gorge has played a pivotal and strategic role.

Its first and most important role is the natural structure of the gorge. It seems every single invader simply could not deal with its immensity and level of difficulty to pass it in the past. Every time they tried to walk through it they would be ambushed by the locals who knew its hiding places well and most of the outsiders would never see the light of day.

There are stories of Arab-Saracen, Turkish, Meltese, Sardinian and Corcican pirates that tried and failed to conquer the gorge. Happily sitting in their pirate ships they must have felt confident they could take up the task. Looking at it from the south must have seemed easy until they had to get lost in the serpentine winding uphill steep walls of the gorge. But it literally is for the strong hearted to go through it from the south. Going all the way up to an altitude of 1250km is for the locals only who were born and bred on those slopes.

Under the transition of the Byzantine Empire to the Venetian invaders circa 1319, there was an incidence of a rude and unruly Venetian soldier roaming the village of Sfakia who decided to grab and kiss on the mouth a girl who was known as Chrysomalousa=Χρυσομαλούσα  (the girl with golden hair). As one can imagine this was an unforgiving insult in the day and age and created reason for the girl’s father who was the renowned Stratos Skordilis and  also to her fiancé . The father wanted revenge and a full blown uprising took place. Many of the girl’s relatives got killed and those who managed to get away hid and lived in the gorge till the entire incident was forgotten by more important issues regarding the full occupation of the island from the Venetians out of the hands of the Byzantine lords.

Another story under Venetian Rule; and what is known as the “chicken war” which took place circa 1608, had a few men flee to the gorge as to be saved by the heavy and mortally punishing hand of the Venetian judge. The Venetians had illegally decided that all of the west of Crete give additionally to their already heavily burdened tax each month, a chicken also, to the feudal lords of the land. The insult was too much for the poor Cretans who were left with next to nothing. Thus some Cretan men decided instead of giving a live chicken to the feudal lord to hand him an…egg! Telling him to hatch it and he will receive his chicken in due course! This of course did not go down well with the authorities so yet again the hide and seek hunt and catch game of going through the gorge begun for both parties.

In 1770 Yiannis Vlachos Daskaloyiannis was a man from Sfakia where the gorge boarders and who decided to revolt against the Ottoman oppression only to create a menacing uproar of revenge from the Turks and many Cretan women and children who decided to save their lives went through the gorge.  They were escorted through the hard terrain by Cretan liberation fighters but were ambushed by Turks and they decided to fight to the very end rather than surrender. Unfortunately very few escaped the massacre and about 100 women and children who were captured were sold to slave markets. For his story click here.

In recent history, early 20th century, the gorge had been a scene to vendettas and again a hiding place for those families who wanted to save themselves from the vengeful family feuds. Many families have had to emerge in the gorge with one surname only to come out with another and flee the island from the ports of Loutro and Paloeochora to other Greek towns or even countries in order to cool down the need for more revenge.

So next time you decide to walk through the gorge (as I have many times; it truly is worth every step and wonder at its beauty) think of all the people who have left their little mark in the place’s history, maybe hear their coded echoes and high shouts of communication while you see a fearless Kri-Kri looking down at you from a high precarious place.

Nikos Kazantzakis, the Cretan writer of Zorbas the Greek
Beach or pool? The choice is yours!