Nikos Kazantzakis, the Cretan writer of Zorbas the Greek 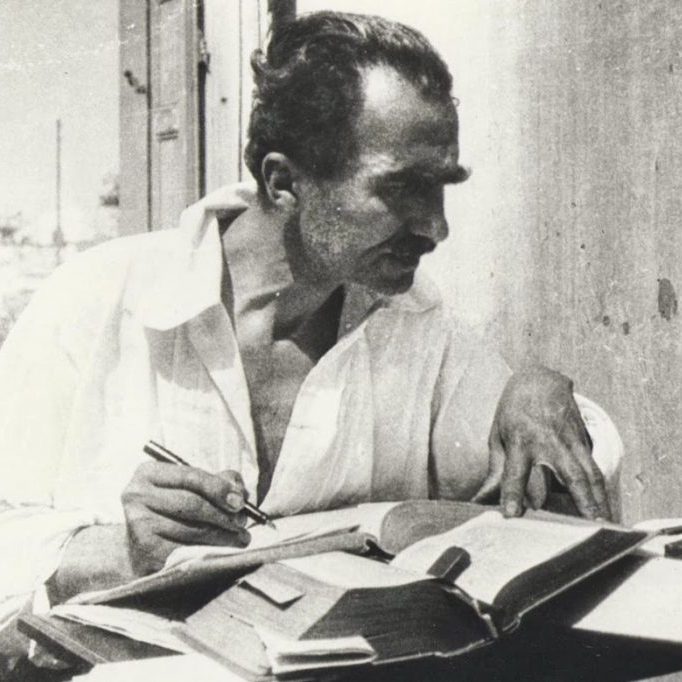 There is a film and a musical score most people around the world know quite well that immediately brings to mind Greece. That film is “Zorbas the Greek” and the musical score is for the Zorba dance. Even more so there is a phrase Zorbas says that has been repeated many times by the lips of many as if a mantra: I have nothing, I want nothing, I am free!

The man behind this adaptation of Zorbas the movie is none other than the writer Nikos Kazantzakis. He is our national treasure as a writer and most importantly for us Cretans a man born and bred in Crete.

When the movie was decided upon to be made by the Greek director Michalis Cacoyiannis, there was a unanimous approval that Crete with its breathtaking, wild and beautiful landscape would be the only place where it could be filmed. A wise choice was the location of Stavros beach in the prefecture of Chania with its mountainous backdrop and gorgeous sunrises and sunsets that could depict the true venture of the two main characters who would build their coalmine and most importantly it is the location were Zorbas played by Anthony Quinn danced his famous Zorbas dance we all know and love. The musical score was written by another much loved Cretan, Mikis Theordorakis, who changed the way Greece was recognised to the world.

Are we as carefree and full of life as Zorbas is? We certainly are. Our island and its generous people have made such over the centuries. It helps to have the bluest of skies and the most gorgeous beaches in the world too. The fact that the old Venetian harbor in Chania had its own role in the film as well as the port of Souda just makes us Cretans stand a little taller with pride knowing how much this character has been loved.

George Zorbas was indeed a real life figure and as larger than life as he is depicted in the novel and true to the story as the man with whom Kazantzakis tried to set up a coalmine that never added up to much. The expenses for the venture were far more than the capital returns for Kazantzakis as a business man, but what he did gain, that was priceless, was the lifelong friendship he had with George Zorbas who it seems helped him understand that life is to be lived in its fullest form, Kazantzakis being a shy introvert, as we only have one passing in it.

But this is not the only movie to be made from the novels of our prized writer Nikos Kazantzakis. Martin Scorsese directed his novel “The Last Temptation of Christ” with Willem Dafoe, while Giles Dassin directed: “He who must Die” based on the novel the “Christ Recrucified” starring Jean Servais.

But who is this man born on this wild untamed island of ours that can only guide you by your senses?

Well there is a level of difficulty for any Greek writer to form any sentences that may describe or attempt to profile our national multi dimensional writer who is the one and only Nikos Kazantzakis. Born in Heraklion on the 18th of February in 1883, the son of a man of few words, Michalis Kazantzakis, a very stern and strict rich merchant and a very affectionate mother, Maria Christodoulakis from the prefecture of Rethymnon, whom he treasured spending time with as it helped his mind wonder to his future story telling we all know so well today. His father is depicted to a degree in one of his most recognised novels “Captain Michael” or else known with the title “Freedom or Death”.

Kazantzakis tested the ecclesiastical circles when he wrote “The last Temptation of Christ “ as he was almost given an aphorism by the Orthodox church. The novel itself created an unprecedented sensation at the time and the movie brought in a placard mob of fanatics that would seek for the cessation of its screening.

Kazantzakis is a true wise man of letters. The land of Crete and its people played a significant role in his body of work as a novelist. However he never did just write novels: his unquenchable thirst to bring to paper his inner world expressed itself in many forms. He wrote theatrical plays, he translated many of his favourite writers and philosophers, he was a reporter for newspapers, a travel explorer who wrote his impressions into books, and he truly was a man devoted to the muse of expression in the written form.

His greatest achievement, he personally felt, was putting almost an enormous amount of work in translating and adding his own story in the plot of Homer’s Odyssey. It took him almost over fourteen years of his life to perfect it and be happy with it after writing the massive volume seven times. Enormous kudos goes out to his devoted wife Helen Kazantzakis who would type his handwritten epic all seven times on her trusted typewriter without ever feeling it as a burden. This monumental volume of work was 33.333 17-syllable verses.

Kazantzakis had two more men who marked his life in a positive note. Friedrich Nietzsche, the German philosopher who helped him shape new ideas about life and politics when he was a student in France and his Thesis was based on the philosopher too and the other man was his Greek friend and poet Angelos Sikelianos.

Kazantzakis felt that the only way for a man to understand and push his knowledge and most especially understand that man’s spirit needs to be challenged was through travel, to question his own beliefs that were passed on to him through his closed society as a young man and seek as much diverse truth from countries that were so different from Crete. He traveled to Japan, China, Russia and a great deal of Europe. For many years that is all he would do, without ever needing to settle in a permanent home as his thirst for all this knowledge and spiritual wealth allowed him to gain the priceless information he needed in order to write his novels and help pay his way through life as a newspaper reporter.

Eventually just before the beginning of WWII he settles on the island of Aegina in the Aegean and builds a simple, minimal in needs home from where he will write some of his most famous novels. During those years and just as so many people at the time he almost starved himself to death but felt he would overcome his hunger only by devoting his life to writing. Zorbas was written there, as was  “ The last temptation of Christ”  as well as theatrical plays and the translation of the Iliad by Homer.

Yet after the war he seeks to leave and travel again for a few years and only settles due to health reasons eventually in Antibes of which reminds him of Crete. Both houses in Aegina and Antibes he affectionately calls his “cocoons” as he spends so many hours in his office writing, thankfully for us, his masterpieces one after the other.

An airport has been named after him in honor in the prefecture of Heraklion. One can write so much of this great man who has shaped the life of so many of us Greeks and myself included. I consider him my greatest philosopher, philanthropist and humanist. He is a man whose name remains alive and will do so over the years as he continues to be such an inspiration to so many. He is one of the most translated writers in the world and his work continues to be published although he died from a complication from a vaccination for malaria in Germany on the 26 October 1957. He was given a state burial with full honors as if he were a general and his grave is situated on the bastion of Martinego in the city of Heraklion with his gravestone carved with the phrase: “I hope nothing, I fear nothing, I am free”.